Well did not think that much would happen this month with being at the Tamworth Heritage Show but things have moved forward.

35 was on show at the Tamworth Heritage weekend and got loads of interest from people at the show and it was great to meet some of the people that worked on him and hear their stories. Well I let everyone know there that if they come to our 5th rally (Reliant’s 75th birthday and 3-wheelers.com’s 10th  birthday) next year she will be finished and could be seen as Tom Williams first made him.

Having bit the bullet so to speak I thought I had best get some work done on him. I got the entire gear box together and then had to work out where the selector for the gear leaver goes as I just pulled it off not checking the position it was in Doh. Having sorted it I moved it though all the gears to double check I could get them all.

Next was the hard task of winding up the kick start spring and sliding the cover on so that all stayed in place, after lots of fiddling I got it together. I then placed a couple of nuts on to hold it together and then pressed the kick start lever down and all moved as it should except the kick start lever did not come back up unless you helped it. After saying a polite word I removed the cover again expecting to see the spring had moved but all was still in place. Then I saw the problem the spring had lost its spring and so wound up and stayed there.

So to the other end I received my new clutch cover from George Engineering and what a lovely job they had done on it for me and when put in place fitted like the real thing. If you need some special machining done this is the place to go.

With the gear box only having one thing needing to be done now, I turned to the engine to get some more done on that.

As it still had its protection on it from when it went to the shot blaster I removed it all and was surprise to see that the shot had found its way into the bits that were blocked off. All was ok though as it had entered without any real force so had not damaged the bore.

The valves had gone a bit rusty so I cleaned them up with a wire brush and it was when I went to fit them that I noticed that the valve springs were different lengths so that job was on hold. As I still needed the piston rings I could not put the head back on so just cleaned all the smaller bits up.

With needing more bits I did not think twice now as where to go so with valve springs, Kick start spring and piston rings (All the bits) in hand I popped over to see the wonderful Mr. Onslow of  Vale Onslows. And as I did before I left all the bits with him so he could work his magic. While talking with him I explained that I needed a carb, or carb restorer as my Bowden carb was very poorly. He then gave me the news that I was out of luck if I could not repair my carb then I would be well stuck. Having that nice deep feeling you get at such news he then asked me to take it in so he could see just how bad it was and greeted it with the words, “It don’t work” which at least made me smile. He then asked me to leave it with him and he would check it out to see just how bad it was.

Well after a very long night I phoned him the next day and was greeted with the words your in luck, I have your piston rings, the kick start spring you gave me is the wrong one for the gear box you have but I have the correct one and I have found you some valve springs. “Great News” I said “but what of the carb” Then came the best news ever “My mechanic has spent a couple of hours on your carb and it now works fine”.

All I need to do is get over there now and collect all my bits.

With a misunderstanding on my work dates at work I had got Saturday off so I thought I would put a few hours into working on the chassis. Well Pete came round to give me a hand and four hours later all the bolts had been undone or removed the technical way (Grinder and saw) and 35 was just a pile off bits. But at least she fits into the back of my van now so I have managed to bring him home to start cleaning up all the metal work. There is some places that are rotten so will need some plates making up but I will save that for next month. 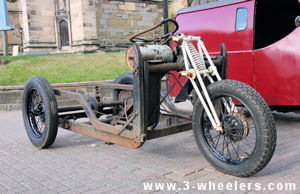 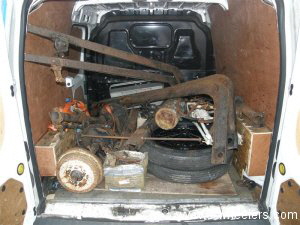 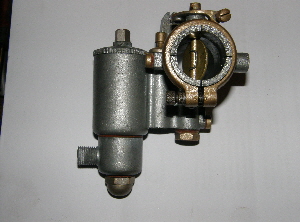 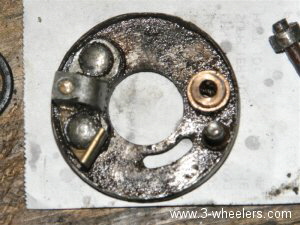 35 On his first public appearance at Tamworth

Just one pin left to remove

Restored carburettor moving as it should

Fitting 35 into a Transit Connect