Lots of work has been done to 35 this month both in collecting parts as well as work being done.

Last month I left you with 35 sitting in the back of my van well he is now safe in the shed and this means that I can get bits done as I like. One thing that I had noticed when taking him apart was that some sections were rotten, the rear cross member being the worse.

This is when I came up with the idea of sweet talking my friend who’s got a metal working shop to see if he will bend the metal (2mm Plate) into shape for me. A few minutes later I was then holding a new cross member for 35.

Welding the corners up and drilling a few holes saw it finished. The next section that was bad was the inner chassis rail when it drops from the head stock to the rail. For this I dug out and old tool that we used on Ole Blue, my needle scaler then beat the death out of the section to show the fullest extent of the rot. Once found I then used my precision cutting tool (my angle grinder) and removed all the bad stuff. Then taking some nice new 2mm plate I cut a piece to match the hole and then tacked it into place. Once happy that it was flat I then seemed welded it on both sides so it became as strong as the bit I removed. As I don’t want it to be seen when 35 is all done I then ground the outside flat and just back filled any small blow holes so that I had a repair that could not be seen (except from the inside of the rail as I want the MOT man (John Lees) to see that it’s been welded right.

The one leg on the outer chassis rail has also been repaired having the section that was missing replaced and just waiting drilling.

That’s a sore point as I seem to of mislaid the charger for my Battery drill and the electric ones packed up so I need to go and buy a new one.

Popped over to Mr Onslow and got my parts that he had sorted out and when there he spoke to me about my kick start spring as the one that I had given him, he thought was the wrong one for my gear box. He showed me a replacement one for the type I took in and then the one that he thought it should be and said it’s up to me which I want to go with. As this chap has never been wrong yet about my parts I took the one that he said it should be as I felt this was the right one. Getting home I tried it in place and it fitted a dream and so now managed to wind up the spring and put the end cover onto the gear box so that side of things is now complete and the kick start lever works as it should.

My carburettor looks like new and moves so free it’s hard to think that it’s the same one. As I can’t get my drill working I can’t put the head back on yet as I need to hone the bore before fitting the piston so this will wait till next month.

The old bits of the points have all been removed now and a new contact peg has been made to replace the old one. The points base plate needs some serious cleaning work at the moment as it won’t fit nice and free into its housing so again next month I hope to have this done as well.

I now (apart from the cables) have all the parts to refit all the engine back together though I can’t test fire the engine till I have it back in the chassis as the kick start is on the gearbox.

While down at  Mountford Rubber  they found a nice piece of ribbed rubber mat out for me so that when 35 is built I can place it on the floor in the load area. I was wondering what to use here as I did not want a rubber that would look out of place.

Well back to welding and hope to have lots more of the chassis done for the next update. One thing that will make things easier is that my girlfriend is going to buy me a shot blast cabinet for Christmas so this means that all the little jobs that need doing I can now do at home. 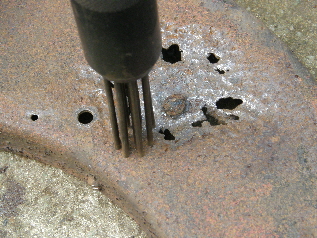 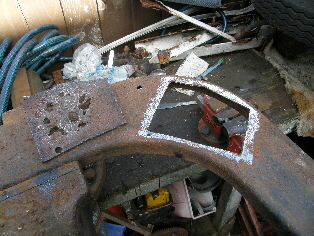 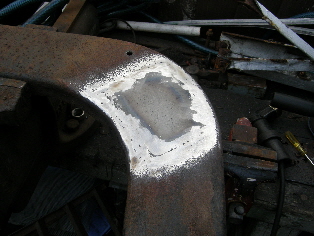 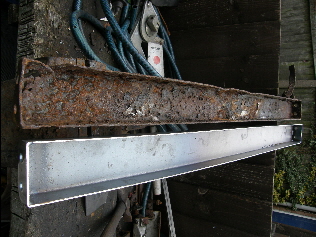 Once rot found then cut out

and replaced with some new fresh metal