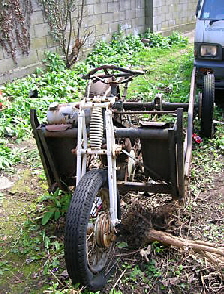 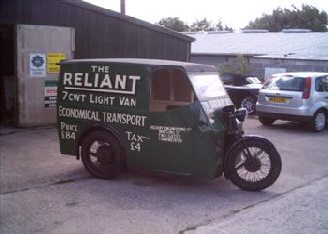 As the body of 35 had been scrapped when it was pulled out its hiding place I had to think what to do. The only van that is the same type as 35 is at the bubble car museum. Though this van was made in January 1936 it is the same drive chain as 35. Upon speaking to the chap that restored this he made the body up from pictures as his body had also long gone. At 6’4” kick starting with the van body on seemed awkward  so upon further investigation a new style was found

This Reliant is also the same type of drive set up as 35 and while for years it was believed to be the prototype Reliant Elvis found out it was made up by a farmer in the 1950’s using a BSA engine to replace the J.A.P. So this was the answer to problem. So 35 would become a 7cwt pick up instead of a van and allow me to kick start it and drive it with comfort well a little.

35 as this Reliant has became know was found at Kinghams of Croydon in 2008. After speaking to the owner he purchased the car in the early 50s so his sons had some work to do while garage business was slow. After the lads had stripped the body and started painting bits white like the forks work had picked up. So this Reliant was then pushed into a shed and the body stacked at the side (As it was in panels) and the doors closed. Now move forward 50 years and the roof of the shed caves in. So the builders are called in to assess the roof and fix it but when they open the door there’s an old Reliant laying under the roof beams that had fell. The shed then was cleared and the rolling chassis was pulled out and dumped at the end of the drive. The body (which was not just bits of alloy as the ash frame had rotted away) was scrapped. After a few more years in 2008 the Reliant was put up on ebay for sale. I missed the ebay auction but was informed by Elvis and so when I checked it out the auction was over with the car unsold. I then phoned and managed to do a deal to secure the car and the following day went with Elvis to collect it. As the registration plate was missing we decided (in Reliant fashion) to dub the car 35 in case the plate said something like 894BOB. It did not though as it was 894XUV so the name 35 stuck and has been so ever since.