Not as much as I was hoping to be done this month has happened. I have sent the clutch rod away to be made as the one on the gearbox now that it’s finished seems ¼” (6mm) short. All I can think of is that over time (75 Years) the rod has worn a little.

Also the plate that I lost, or should I say misplaced as it will show up as soon as the new one that I am having made is finished, will soon be done and means that as soon as the chassis is back together the engine can be fitted.

I have almost finished the engine now and it’s been bolted back together. The first task in getting it ready was to use a piece of gasket paper and a small ball pain hammer and make the gasket that sits between the two blocks.

The bore was then honed as with fitting new rings I wanted to give them the best chance of bedding in. The fun was when I came to put the block back on the crank case as normally you would use a piston ring compression tool but the problem here is that unlike a normal engine the piston sits between two blocks. This lead to some very careful work as I held the cylinder block and the piston and then compressed the rings by hand one at a time and slid them in to place. Once done I up righted the engine and bolted it together. Using a small amount of spray grease I then rotated the engine to see what it felt like and was very happy as it was very smooth.

The next job then was setting the timing up. Being a single cylinder engine it makes this task very simple well you would think so anyway. Having found the timing marks on the crank and cam I slid the cam into place and then rotated the engine. On the first stroke the inlet valve opened as the piston went up. Then as it reached TDC the inlet closed and the exhaust opened ????? then the engine did two dead strokes. Totally puzzled by what was happening I left the engine for a bit and went to cook my tea, that’s when it then hit me like a very large hammer. Going back to the engine I rotated it again this time as the piston went down the inlet valve opened, and then as it came up the inlet closed. Once TDC passed the exhaust valve stayed shut just like it should till BDC then it opened as the piston came up. What have I done different you ask ……. I have rotated the engine the right way up.

All I need to do to the engine now is fit the points and bolt the head on as well as grind in the valves and then the engine is ready though I can’t test it till the chassis is finished as the starter is on the gearbox.

The chassis is coming along well with only two more bits to be repaired and then the whole lot is to be cleaned and then painted before putting it all back together.

I have had a word with my boss at the museum and he has said that if there is a free bay then I can use it to put the chassis back together which is grand as it’s a lot warmer than the garage.

Small bits that need cleaning up now can be done at home thanks to my girlfriend as she has brought me a shot blasting cabinet for Christmas. Then it created more work as I then had to buy a drier and regulators for my airline. Still all is now done so I am a happy bunny.

I don’t know how much will be done in December as I have a few discos to do as well as finish building Pete’s wall I pushed over in his house (Buts that’s another story) so till then have fun. 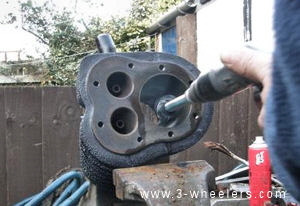 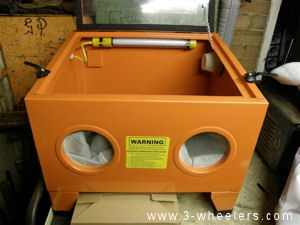 Honing the bore ready for the new piston rings

Checking the block and barrel

Early Christmas present from my girlfriend