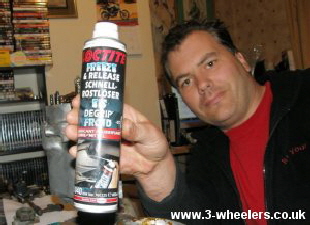 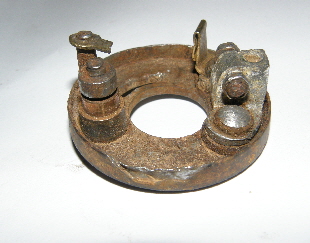 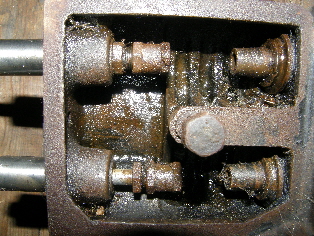 The points are in a bad way and shorting out

Even the valves have are in a bad way

Well another month passed and work continues on the engine and gearbox. I have made loads of calls to try and find bits for my J.A.P and most calls end with, sorry we cannot help you but the most annoying is when you get classic re-builders saying “It’s unique to Reliant, I would just put it in the bin and get an engine from a Rotavator which will fit”. These companies will not be receiving any work or money from me. How can you say in one breath that it is unique and then say throw it away, surely that makes more reason to try and save it.

Still off my high horse now and back to the matter in hand.

The Bowden carburettor on my engine looks like its scrap as part of it has been damaged when the roof fell in and landed on it. So the answer here is to fit an Amal carburettor to her as this was used in the same year and they also brought Bowden out when they folded.

Having spoken to a very helpful man at Amal he informs me that they can supply me with a brand new carburettor for my engine at the cost of Ł236. And this is a special build as well not just off the shelf. So once all my other bits are sourced I will be getting one of these. It also has nice shiny bits fitted.

The next problem is the piston rings, I found a place in the Malvern’s called Cameron Racing Engines and after giving them the size of my piston and groves the can supply me a set of rings for Ł20.00 which is a very nice price.

So two down and one to go on the engine, the points, this is proving a real problem and is one of the main reasons that some of the people that I talk to are saying scrap the engine. I have at last got them out of the housing with help from the nice men at the B.C.L.M transport group and some freeze spray. Now all I need to do is find some new ones and no matter who, I have tried and they all come back the same in that they don’™t have anything like them so it looks like this may have been down to Reliant. If it comes to it though, I will see if I can get the bits and make the points myself.

I have started to strip the gear box now as well. Much to my surprise when I went to undo the screws on the housing for the clutch they came straight undone with no problems at all which was great news. Though the same cannot be said for the clutch, the plates have completely had it. There are five disk and four cork plates in the set up so the problem there is to find what bike of the time had the same clutch plates fitted and then I can hopefully buy some new ones. The front cover looks to be an easy fix though as I popped along to see my friend at George Engineering and he says that he has enough of the old housing left to be able to make me a new one which is grand news.

The next task will be to pull the end plate off the gear box as the filler plug is missing and there is loads of yuck inside the gear box which will not help it.

The gear box is a Burman three speed with reverse and it will select all the gears with no problems at all so apart from a Heli-coil in the one hole for the clamping plate where the stud goes and clean there will be not much work needed here.

I spoke to Mr. Lees, the chap that does our MOTs, and sponsored us on the trip to Norway and he gave me an old brake shoe that might fit 35 though sadly it won’t. He has also said that he has a wheel he can give me which is grand news as this will give me a spare wheel. He then showed Pete a picture of a chap that just sold a 1935 Raleigh LDV so being cheeky I called the chap to see if the brake shoe I wanted was the same as on his van and it was.  He had also owned and sold to Reliant the 1935 chassis that they now have and has asked me to give him a call back as he thinks he may have an odd shoe that I can have.

And the news gets better as while at the museum I met a chap that has a set of four 4.50 x 18 tyres that he will let me have cheap for 35.