Another month passed and not much seems to have been done on 35. This month has seen loads and loads of phone calls and at last I have managed to trace some of the parts that I need, all I need to do now is find the money for them.

The gear box was filled with grease from the past 74 years needed a good cleaning. So as we have had a new parts washer installed at work, one of these environmental friendly ones, I thought this would be a good test for it. So when I got into work I placed the gear box in soak until I finished. The advantaged being that I finished half an hour before the others so gave me that time to clean it. After spraying and brushing the box for 10 minutes it came up great looking like new and also gave up a nice surprise when it was cleaned up as I have found where the speedometer drive take off is.

Once back home I stripped the clutch unit down as the two drums had rusted together. With the centre nut undone the input drum came off with very little work though when removing the outer drum I found out that it ran on a drum roller bearing race and all the bearings went all over the floor. So after picking them all up I had to fit them back in to place to make sure they were all there and there was 24 in all. Then the next good laugh I had to take the drive drum back off and not learning from the first time I dropped them again though this time I knew there was 24.

The stud that at first I had thought had ripped out of the block had not. Once the box was clean I noticed that the thread was still good so I locked two nuts on the stud and managed to screw it back into the block with no problems at all, good news as it now saves me having to get a Heli-coil done.

While Pete was looking on e-bay he found a nice 1935 Smiths speedometer which will look right at home on 35 and also on e-bay Elvis also spotted an old Reliant plaque from a girder fork Reliant which will also look great on the back once restored.

The steering wheel that I brought on e-bay was two big for 35 so not wanting to throw it away I thought I would give it to the transport group at the Black Country Living Museum. The great news is that they were looking for a wheel just like this for one of the buses they are restoring and the wheel fitted a treat and as they were given a quote of £400 to fix the wheel off the bus they insisted that they give me the £21 that I paid for the wheel.

The shoot blaster at the museum should be working in the next couple of weeks so this will mean that I can take my bits in and get them cleaned up and ready for painting letting me then start putting the engine back together.

Nearly all the bits that I needed now have been traced from three suppliers, these I will list next month the only thing that I would like to do now is get a reconditioned carburettor so I can save some money on buying a new one. 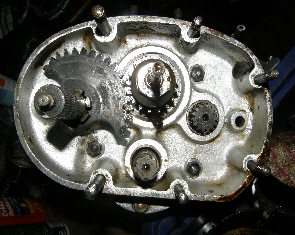 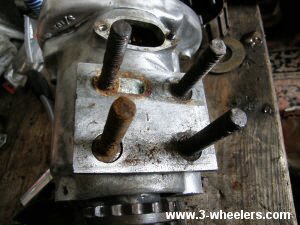 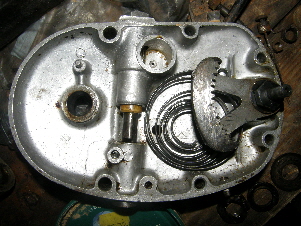 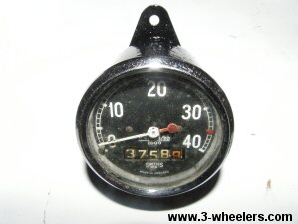 Gearbox is better now after a good cleaning