Well back again and this time not missing this month’s dead line.  A lot has happened since the last update in the way of parts getting to me, (Right parts and wrong ones). Hence why there was no July update but all sorted now and almost back on track.

At last I managed to get to Vale Onslow and they had my points in stock. Also they had all the clutch plates that I needed to complete mine and a spark plug which fits the JAP engine. I don’t like the plug as it’s a NGK, while these are very good plugs and I run them in my bikes I don’t like the look of it on the JAP engine as it seems out of place so I am going to contact the Green Spark Co and see when they might be getting some Lodge C3 plugs back in. They cost £15 a plug but then are the standard fitment that Reliant used.

The best news of all from Vale Onslows was the kick start. Mine was the wrong type and someone had bodged it to make it fit so with the gear box apart I took out the kick start shaft and took it with me on the hope that they may have something which is a better fit. Well they did and to my surprise it was the Kick Start for my gear box. I thought at first that it was a Sturmey Archer box the same as was fitted to the Raleigh LDV3 but after Mr Onslow logged onto 3-wheelers.com and looked at the pictures from 35’s restoration, he tells me that it is in fact a Burman gearbox and had a brand new kick start for one in stock, great result.

The piston rings I was sent were the wrong ones so they have gone back and Mr Onslow has said if I take the old rings to him he should be able to find me some out, so I feel another trip to his wonderful treasure trove shop is on the cards.

I now have a full set of brake shoes thanks to the chap that Mr Lees (The MOT man) put me in contact with and he also showed me the LDV van that he was restoring which has the same carburettor on as mine so I could see it with all the correct bits in place. It also looks like my carburettor will need some hard work if I do want to save it instead of using an Amal one.

The shot blaster at the museum is still not set up so I used a company called Applied Surface Treatments and they shot blasted my wheels and head for a great price. Also they have a cabinet big enough to fit the chassis into so that will make cleaning that up a dream. Cleaning the wheels showed rust holes in the rim but not too bad so I got some Loctite 3463 which is a metal filled compound. I used that to fill the holes and then sand it flat. This stuff dries as hard as steel so should do the job well. I also used a small amount to repair the cooling fin on the head that broke off and its done a grand job of that.

I have painted the wheels now in Hammerite smooth black but I am not happy with the finish. The wheels are pitted and so all the bumps are showing up big time in the black paint. As of yet I don’t know what to do with them, I don’t know whether to try and use a small amount of filler to smooth out the wheels which will give a better look.

The head on the other hand has come up grand and really looks good. I have sprayed it with high temperature paint so it should last on there well.

I have started rebuilding the gear box now and just need to find out if my new clutch cover I am having made is ready and then that will be one bit that is finished.

As the Tamworth event is now just around the corner not too much will go on now but remember 35 will be at the Tamworth Heritage Weekend show for all to see as she stands now. 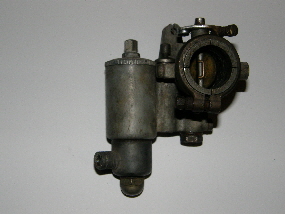 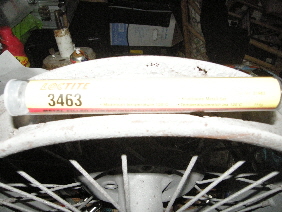 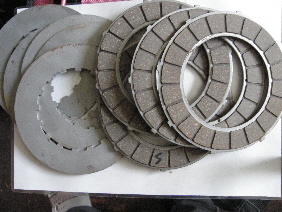