Well New Year and things are still moving forward with 35 to get ever closer to having him finished.

I have made up the remainder chassis sections needed to repair all the rot on the chassis so it only needs to be welded now into place and then painted.

The big job this month that’s been done is the rebuilding of the back axle. All felt fine when running it by hand but I thought a good strip and clean would not go amiss. So after removing the hubs, which unlike modern Reliant’s doesn’t need a puller to come off just slide them off by hand I set about undoing the bolts which hold the axle case together. Then using a little force from my leaver (Big screwdriver) I managed to split the casing apart to show the chain drive diff. The half shafts came out easy and were covered in 75 years of grease which hid some real problems with the longer of the shafts. The first of the problems is that there is torque twist in the diff end of the shaft and the second was the shaft has lost 1/16” off its diameter where the bearing sits. I was thinking of fitting a speedy sleeve to the shaft and took it to M & E James for their advice. They said with the damaged to the shaft that it would be best with a new one but this will set me back £300 so I asked if the worn section could be sorted to get me out of trouble. They recommended having the shaft Metal sprayed instead of a speedy sleeve as it would cost about the same and the metal spraying gives better results for the bearing to sit on. This will only cost £70 and I hope to bring you pictures of this being done next month.

Back to the rest of the axle and apart from one bearing that have a damaged inner race all was ok. The bearings should not be a problem as Ericks specialise with bearings. One of the bearings did not want to come out of the housing and as it was a blind bearing my puller would not do the job, so after talking to the very nice people at our Transline division they said I could take the axle case up there and they would pull the bearing for me.

Jason came to the rescue and using a special slide hammer soon had the bearing removed. Then the cases and shafts needed 75 years of grease removing from them not an easy task so I thought.  I was directed to what can only be described as a very large dish washer and so in went the axle cases and shafts and twenty minutes later they were done and completely clean. This parts (still looks like a big dish) washer reaches temperatures of up to 400 degrees that’s why it’s so good.  Next task was to attack the cases with a wire brush to remove any old paint and then tape up all the bits that I did not want paint on as they were going into the spray booth to be sprayed a nice black. Next day I went back and the bearings were pressed in for me and then with my nice clean and painted bits I set off home to reassemble the axle. A big thank for all your Help Transline. 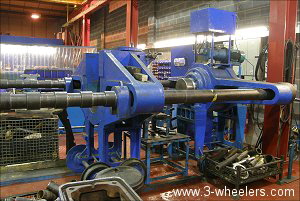 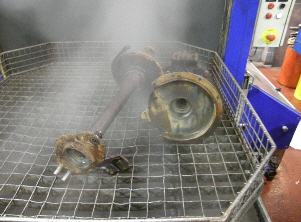 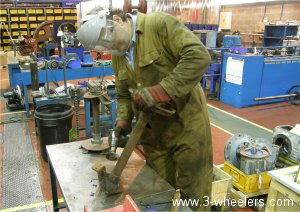 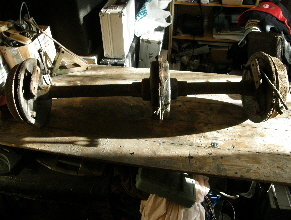 Axle ready to strip and rebuild

Into the dish washer for a good clean

You have a ten ton press that is nice meet mine it’s only a tad bigger, the mother of all presses a 4,000 ton press