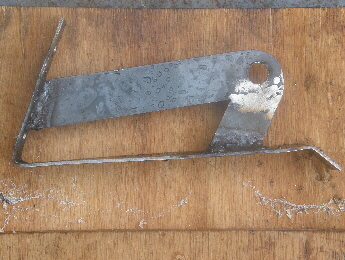 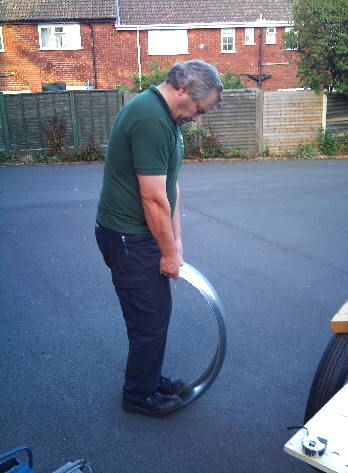 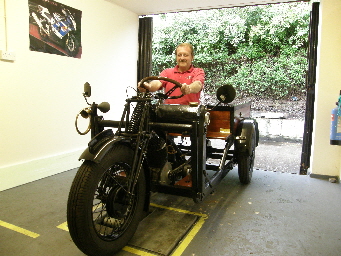 MOT time will it or won’t it

Well time is almost up and the big day is almost here and will 35 be done that is the question everyone is asking especially me.

Lots has been done and brought for 35 I was lucky in the fact that I received some extra finance so have gone on a spending spree and brought lots of bits needed for 35.

Some stuff has still had to be made though and the tank support bracket was one of these. The main problem with having 35 so far from home is when making things like this as you can’t check as you make. So taking a piece of cardboard I carefully made a template of how the bracket would go and marked where the holes would go. Once home I found out some nice 2mm by 25mm flat strip and bent it to suite and match the cardboard. All was going well and I laid the two pieces down and applied a little weld to hold them in place, wow “that looked good so I thought” then placing it on the template I saw my mistake. Doh I had welded the one piece upside down. So hiding that piece out the way I started again this time making sure that the pieces were laid the right way and welded them together. Once back at the car I checked and all was good except I had drilled a 10mm hole for the tank bolt instead of a 14mm so with a quick go of the drill that was sorted.

My Duplex chain arrived from Ericks and looks good. Once I had worked out how it went on 35, (The original chain was missing) I found the length I needed and split the chain to the right length. After fitting the con link I notice that the chain guild was slightly out of line, hummmm I know I will bend it back a little easy yer right. After taking a bar and gentle pushing the cage back in line there was a bang and the adjuster fell to the floor, Doh (again I here you say) I had snapped the bolt that holds the cage in place. With only a little panic welling up inside of me I popped along to see my friend George at George Engineering and showed him the problem and with his little smile that he dose he said “No problem I will call you when it’s done” and sure enough I gets the call and popped round to find that he had even matched the thread for me so the old nuts could be used also instead of mild steel he used En8 so it should stand up to the job better. Once fitted all fell into line and looked good.

The mudguards were one big problem that I had as the only place that I knew I could get some which would be handmade would cost me almost Ł100 each and Ł300 for the set seemed too much to pay. So I put that bit to the back of my mind for a bit and when I popped into my local camping shop to collect some bits I notice they had some nice metal 13” mud guards at Ł40 each bargain I thought if only they were big enough and that’s when I noticed that there were some 18” ones on the side but in plastic and that’s when I had the idea. Once home I looked on the good old internet and found some Metal mud guards which were 28” across and only Ł20 each while no good for the front would be perfect for the rears. Now the back is sorted time to find a front mudguard that’s not only big enough but wide enough. The trick I found here is knowing what to look for and the key words. Front Mudguard was not working the key was “5” front fender” and it came up with a custom fender for a Harley for only Ł28 so saved a fortune. Once they got here the front fender fitted like it was made for 35 and the front number plate went straight on even though it was made for a Royal Enfield. The back ones needed some technical adjustments (stretching from 28” to 33”) this was done by using a very special machine and ………. Ok Pete I did it by simple standing on one end and pulling up measuring as I went to make sure they were the same and once fitted they looked grand.

As the rear lights have not come yet I am taking 35 to the MOT station without any lights as they are not needed for an MOT.