Well the big day has come and how did 35 do?

Well as you know last month I left you at the MOT station with Mr. John Lees well after John making the exhaust and fixing the fuel line for me 35 passed with flying colours with just a note to say that he can only be driven in the day light.

The reason for this is that my back lights had not come so I removed all the lights from 35 and took it with no lights on.

Once the MOT was done I then booked the afternoon off and went to camp out at the DVLA office to try and get the registration sorted. To my surprise the queues were not what they used to be and after the chap looked over all my paper work he told me that the letter Mark Cropper gave to me had not been signed so could not be accepted.  Arrrrgh Panic big time, well after lots of phone calls I managed to get Mark’s mobile number and he very kindly said if I can get to his works in the city centre then he could give me a fresh copy of the letter all signed and sorted.  After a mad dash across Birmingham and then a mad dash back all was then good and I had two weeks for the DVLA to sort out the registration.

So once back home my lights had come but had to be modified to work on 35 as the number plate part of the light was in the wrong place, and boy was that a pain as the whole light needed to be taken apart and re-drilled in order to get them to work. Once done I got an old number plate and then found the centre of the tail board and plate so I could mount the lights each side. Next came the front side lights that Mr. Lees gave me, these had suffered over the years so with a quick repair and new bulbs and brackets they mounted onto the front chassis nicely.  A couple of days later I got a letter off the DVLA saying that they wanted to see 35 and they had booked me an appointment only two days before Tamworth so now it looked like 35 wouldn’t have a registration number in time.

Still, I carried on doing more work on 35 in getting him ready for the 5th Reliant Gathering in Tamworth and time was getting shorter as I also had to make up the new sign for Tamworth and do lots of other little things that were needed as well.

The time soon came for 35 to be transported to the DVLA and in their letter they had said that 35 must be carried to the location.  So after a quick phone call to Elvis, he soon arrived at my door step with his car transporter ready to take 35 over for me. Once there we unloaded 35 and let them know we were there.  After a little time a lady came out with her clip board and asked me a few questions about 35 and then asked me to show her the chassis number and engine number were, which I did then she was just having a good look for what seemed like ages. Then noticed her clip board and asked what the car was on it, she said that that used 3-wheelers.com to find information on trikes they need to inspect. I then pointed out that Elvis was 3-wheelers.com and the information on her board was this trike she was looking at, She then turned to me and said, “ Yes all is OK ”. So me being a little dumb, I said, “ That means he’s passed? ” “ Yes ” came the reply and I was over the moon. Asking how long the paper work would take to sort out and explaining why I was so keen on getting my number for the Reliant Gathering she said she would try and get it in the post for me that night.

Well she certainly did, the next day when I got home from work to my surprise there was a letter from DVLA and in it was my Tax disc and registration plate details for 35 so now 35 has an ID which is 894 XUV. This means it’s now official that 35 is back on the road after 52 years. There were still a couple of last minute jobs to do though like making the tail gate and the hinges. Once made I set off to the garage to fit them and then noticed that I had made the hinge plates too long.  D’oh well too late now as I have no hack saw blades left at the garage so it will have to do. Right I thought just drill the one hole to hold it in place, D’oh another mistake I had just painted the tail gate and now I had put sawdust all over the wet paint. All I could do was paint over the saw dust as there was no time left to rub it all down and do it again. 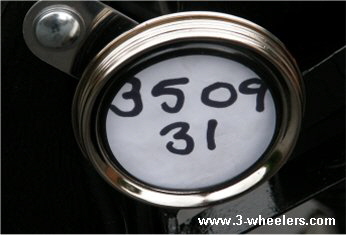 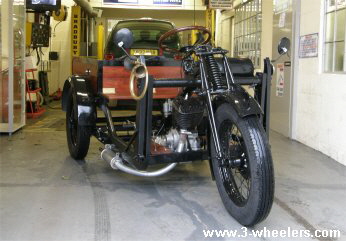 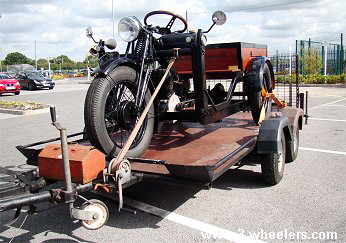 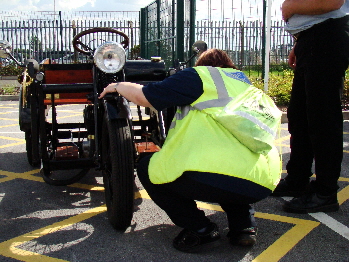 35 on Elvis’ transporter on the way to the DVLA

35 being inspected by the DLVA