This cool little car was found in a shed after 25 years and the reason she was found; the roof fell in, so the garage (Kinghams of Croydon) called in the builders to fix the roof. They pulled the chassis with all her running gear out though scrapped the body that was stacked up to the side. This won't be a problem as plans are a foot for the new one to be made. This Reliant (35 as she is known at the moment until her registration number is found) came up on e-bay and did not sell which -  was lucky for me as I did not know about it until after the bidding had closed. So after a quick call to the garage and then to my brother it was off to Croydon to collect this time piece of Reliant’s history.

Once at Kinghams we were greeted by Andrew and shown round the corner to 35. Here was problem one. The little cars back brakes were locked on solid and she was at the end of a very narrow drive. This is when Elvis came up with the idea of tying a rope to the back of his Jaguar and then pulling the van free from the overgrowth and down the drive. This worked well and after shortening the rope for the fourth pull she was now out in the street. All to do then was put her on the trailer, problem 2. She had been pulled out the drive back wards and as the road was so busy it was not possible to turn her around so all we did was place the trailer in front of her and then couple the winch up and with Elvis and Andrew acting as guides winch her on to the trailer. Because the back wheels were not going round this left two nice black lines on Elvis’ lovely clean trailer floor, oppps.

All loaded all that needed to be done was strap her down for the long trip back home to Tamworth where she was made. After a couple of stops to check the straps and some odd questions we arrived home where Pete met us so we could unload 35 into what would be her new home. This was easier as all we did was me pick up the back end and Elvis and Pete lower the front to the ground and there she sat taking in her new surrounds. Pete was the first to want to sit on her and after making a quick make do seat jumped aboard - so Elvis and I not to be out done took turns and photos as well

The next day I could not go to the garage even though I longed to but the day after I was there and so was Pete to lend a hand. I was amazed, as was Pete, at the fact the bolts after standing for 25 years just came undone as though they were only done up the day before. First thing to come off was the back near side wheel. And after some gentle help (The Hammer) we got the drum off to reveal some very aged brake shoes. So bad were these that the linings were falling off.

Then to the off side wheel this was a little more stubborn and that may have a part to play in that when the drum was removed one of the brake shoes broke. The shoes are made from cast alloy and so far I have not been able to find what else had these shoes fitted. The closest I have found is a Vintage CV motor bike but these are for a 110 mm and mine are 250 mm. Good news though is that the back axle and differential are not seized up.

Next to come off was the drive chain connecting the gear box and engine once removed the gearbox moved freely selecting all three forward gears and its reverse. And with another four bolts undone the engine was out and four more saw the gear box out.  Then to the front wheel and undid the front wheel.

It is my aim to start the rebuild with the engine and put some new rubber on the wheels so that she can be seen at the Tamworth show in September 2010.

Back home next day I set up a table in my front room and started to strip the engine down. This engine is a J.A.P 600cc single cylinder unit and according to the code is a sports version. With the very rusty head removed this showed a very clean piston inside. Getting the WD40 out and not being scared to use it I sprayed a load into the cylinder, and then taking the stale of the hammer I gently tapped the piston down. And to my surprise it moved so I rotated the crank to lift it again and tapped it once more for it to brake free and move nicely up and down the cylinder. With the block off, as I want to get this and head shot blasted I set about looking at the points which are well shot so much so that they will not brake free from the housing. One trick I have been told about is this freeze spray so I will be getting some to see if that works.

Once the engine is done then I will turn to the gear box and check that out and I know that has one big scare for me but that can wait till next month. 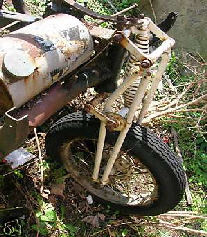 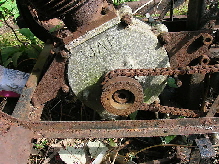 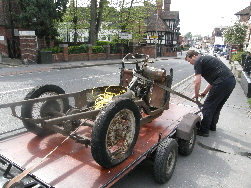 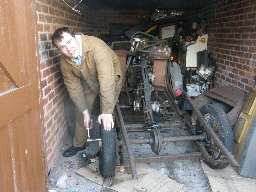 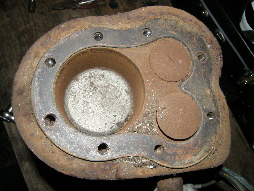 Looking sorry for himself

Getting ready for to travel

The wheel will come off

Not Moved in years