Well more time has passed and I am still rubbing down and painting, the good news is that as I type this I only have some odd small bits to do so all the metal work is now sorted. The one odd thing that I noted while preparing all the metal sections ready to be put back together is that it’s not all square. At first I thought that 35 must have hit something when he was last on the road but checking the metal there is no signs of that. All I can think of is that when Metal Section made the metal up for 35 there was not a fine tolerance put to it. Still all should go back together OK. My shed looks more like a paint shop at the moment with all the bits that have been painted hanging up in there to dry, though I must remember not to duck under the wet paint and then get up as it leaves nice black lines in my hair. I was going to have all the bits sprayed but as there turned out so many (I really don’t remember taking this many bits off) I decide to paint them by hand with a good quality metal paint. The bits look really nice as well.

All the bolts are now sorted thanks to West Bromwich Fasteners who  have come on board as a supporter of 35 and supplied me with all the bolts that I need. I wanted to replace all after I snapped one of the ½” BSW bolts with ease. The new bolts are thread matched to the old ones which is good as when it’s just a nut and bolt it doesn't matter what the thread is as there are some that go into blind holes. The only bolts they could not do were the shackle bolts.

The one hub had been sent to James at CHG Classics Ltd so that he can renew one of the studs for me as the thread is shot. The problem though is that the stud has been brazed in. Also the replacement ones are no longer available so they will have to be made. I am having an extra one done as the front hub is missing a stud. Also James has managed to find me 12 new wheel nuts as some of mine are passed their sell by date and after spending this much time doing 35 up I don’t want to risk it and have a wheel come off.

While talking to James he pointed out that I had not annealed the head gaskets on the engine. I say gaskets as there are two of them. The only reason I can think that there are two is that at some point the head has been skimmed and the second is to keep the compression right.

The only dynamo I can find at present is a Lucas one, 35 was fitted with a Miller which is much smaller though. When I bench tested it I was only getting 1.5 volts out when I should have been getting around 8 volts for a 6 volt unit. I could get it stripped and have them replace the insides with an alternator but this will cost in the region of £300 so is out the question at the moment. The coil, regulator and lights are now done by my Auto electrical supplier which is good news. Checking with Mr Lees, 35 will not need to have indicators as this was a requirement from 1936 though I will need a dip beam on the head light so will need to see if I can get a 6 volt bulb so that I can match it with the holder. The switch will be easy as they are still around to buy new.

With the car starting to go back together next month now I will also have to take the brakes down and get them lined so that once the wheels go on they don’t need to be removed.

All going well now things will move at a faster pace for as my girlfriend reminded me the other day I only have just over twelve weeks left. I really did not need to hear that lol so I best go now and get some more done so till next month 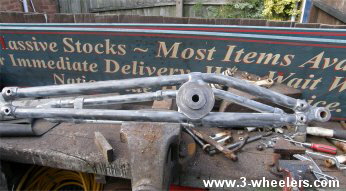 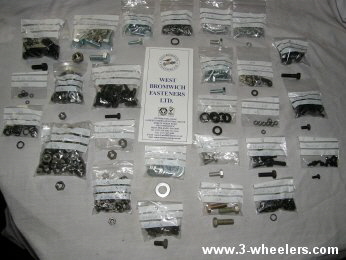 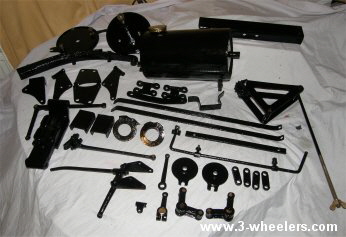 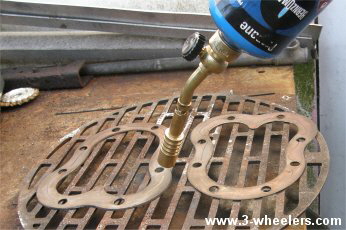 Took some cleaning but forks ready for painting

Lots of shiny black bits, but where do they go

Anyone for a head gasket burger